There’s no new traditional must-have tech gift this holiday season. Most geeks already have an iPad, a laptop, big-screen TV, an Xbox. 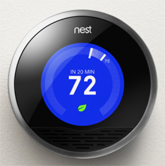 What about a thermostat?

Programmable thermostats have been been on the market for years, but they are as fun to program as early VCRs. Now, Tony Fadell, who played a big role with creating iPods for Apple, is using his design skills with the Nest thermostat.

Because traditional thermostats are so hard to program, few people adjust the temperature to fit their schedules. The Nest does most of the work automatically.

Temperature can be controlled by rotating the outer ring of the hockey puck-shaped device. The color screen turns orange when the heat is on and blue when the air conditioning is active. It also gives an estimated time until you reach your targeted temperature. A green leaf appears on the screen if you keep your home at a temperature that the Nest considers energy-efficient.

After a few days, the device starts learning your patterns and adjusts the temperature automatically. It also uses a motion detector and light sensor to guess if someone has left home and adjusts accordingly.

The Nest also can connect to your home’s WiFi network and can be adjusted via a website or smartphone app. I would love to have this option to crank down the temperature while away during the holiday weekend but have the house warmed before I return home.

Nest works with most heating and cooling systems. But it doesn’t come cheap: $249. If you lack real-life skills like me, you may have to pay $119 to have it installed. But other competitors cost up to $500 and lack the slickness of the Nest.

If it helps save energy, it is easy to see how the Nest could pay for itself after a year or two. Customers seem to agree. The Nest is sold out through early 2012, but buyers can sign up for an email alert when the high-tech thermostat is back in stock.