The time of use rates went hand in hand with the installation of “smart meters” across the province, at a cost of more than a billion dollars

The meters, which measure power use throughout the day, allow utilities to charge higher rates when demand for electricity is high, and lower rates on weekends and overnight, when demand falls off. 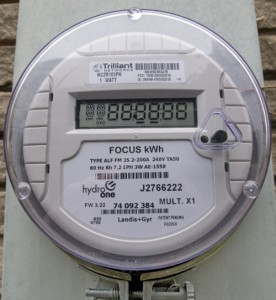 The off-peak rate — charged from 7 p.m to 7 a.m., and on weekends and holidays — is 7.2 cents a kilowatt hour. (During the summer, the definition of peak, off-peak and mid-peak hours changes).

But the new rate structure has had modest, if any, impact on conservation by householders, says the study, conducted by Navigant Consulting for the Ontario Energy Board.

It used two different ways of measuring how much households cut power use with the introduction of time of use rates.

By one measure, consumption dropped 0.2 per cent because of the rates; by the other, it dropped 1 per cent. About 93 per cent of Ontario households are subject to time of use rates.

The study found there was a modest reduction in overall power use during the winter that could be attributed to the new rates.

But it found “there is no significant summer conservation impact” from the time of use rates.